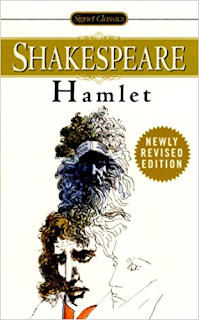 There is a lot of philosophy about life or death.  And then, there’s a lot of death.  It’s all about dramatic actions and their consequences.

The story is so rich and inspiring, there have been numerous adaptations, it’s easy to get lost in choosing only one to watch or read.

Ranked as: Lasagna or Hearty Casserole
It has the psychological depth of Crime & Punishment.  Hamlet begins with so many moral dilemmas and the plot twists almost beyond comprehension!  There are layers of things to interpret and unravel.  Each character has their own motivation which enriches the plot. The climax has become the pinnacle cliche!  I’m sure every reader agrees.  Is there a more cliche ending?

This video shows all of it!!! Spoilers abound.  Even with spoilers, it’s still great to experience the reading of this masterpiece.  If you’ve watched Disney’s the Lion King, you already know all the spoilers.  Sorry!


Off the Beaten Path

To drive home my point that Hamlet’s ending is cliche…. I included the trailer for Sons of Anarchy.  I didn’t catch the similarity to Hamlet until the final scene, in Season 7!! Loved the ending to both: Hamlet and Sons of Anarchy

Disclaimer: This is the trailer for season 1, which is a show about a biker gang.  So there are a lot of fight scenes and could be unsettling for sensitive or younger viewers.  Trailer is probably a PG-13 Rating.


Packing List
✓ A Skull: Decorative Figure or Computer Wallpaper
✓ Highlighter for all the great quotes!
✓ Trusty notebook for resulting inspiration
✓ Character List for how everyone is related
✓ Adaptation of your choice: Book or Film

Stalingrad By Vasily Grossman has been an amazing read so far.  I’m only 150 pages into this 1000 page masterpiece.  I’ve read a few Russian classics already, thoroughly enjoying each one of them.  I must say … this is the first novel where I felt compelled to print out the character list to make notes on as I journey through the story.
One of the translators, Robert Chandler also wrote the introduction for this work.  He mentions the struggles Grossman had in writing this & the many more once it was written.

There are quite a few extra characters, many will be seen only once and like real victims of a wartime world, they’ll disappear into oblivion.  Already, I’ve been deeply moved by some of the character sketches we’ve seen so far.  I’d like to make brief notes to keep track of how I feel about some characters, check the list to see if they’ll stay in the book for at least a couple hundred pages.
So, I created this PDF to help fellow readers of Stalingrad.  Feel free to share thi…

An Invitation to Walk a Mile

Cuisine & Delicacies
Ranked as: Hearty Veggie Burger
This non-fiction book tells the story of so much more than the seven students who were found.  It goes through the lives of each student, their community & family.  Once their passing occurs,    Talaga gives over the details from when the child went missing, to how the police responded any follow up or lack of.  Finally, she concludes with an overview of the inquest that happened in Thunder Bay as part of why so many are dying while attending school.

This 5 minute video is a woman sharing her experiences with racism in Thunder Bay, part of a series of interviews…

“He had become so completely absorbed in himself, and isolated from his fellows that he dreaded meeting meeting, not only his landlady, but any one at all.  He was crushed by poverty, but the anxieties of his position had of late ceased to weigh upon him.  He had given up attending to matters of practical importance; he had lost all desire to do so.  Nothing that any landlady could do had a real terror for him.  But to be stopped on the stairs, to be forced to listen to her trivial, irrelevant gossip, to pestering demands for payment, threats and complaints, and to rack his brains for excuses, to prevaricate, to lie — no rather than that, he would creep down the stars like a cat and slip out unseen.”
(Garnett; Part 1, Chapter 1, Page 1-2)
“He was so immersed in himself and had isolated himself so much from everyone that he was afraid not only of meeting his landlady but of meeting anyone at all.  He was crushed…