There’s a few topics I want to touch on with this book, The Bear and the Nightingale.  It can apply to Neil Gaiman’s Norse Mythology and a little bit to The Strain By Chuck Hogan & Guillermo del Toro.

What do they all have in common?  The underlying plot is based on mythology from another culture than the writer.  Neil Gaiman is from the UK.  Hogan & Arden are American.  del Toro is from Mexico.  They have written books that were inspired by myths or fairy tales from North Germanic culture, Romanian Strigoi or Vampires, and Russian Fairy Tales.

Of these works, The Strain is the most different from the original myth.  The authors took an ancient, obscure and relatively unknown to the average reader of non-vampire books and built a whole world with historical roots impacting the current world of the novel, they added themes of biology, evolution and today’s real world problems to the story.  They did a brilliant job and even added a TV Show to expand on their world.

Here's the Trailer, a little creepy:

Speaking of Strigoi & TV Shows, a Romanian lady is actually working on a fabulous grassroots documentary ^.^  Here's a link to her fabulous Youtube Channel.   She’s telling about the Strigoi in her own voice and including the voices of other Romanian folks, where the original myth stems from.

The Bear & Nightingale also took a few liberties with the original fairy tales and with the Russian name systems (Patronymics).  She gives a clear explanation of this in her note at the back.  She did write a lively, fast paced novel with an interesting story line.  She captured this historical context and weaved in Russian Fairy Tales in a creative way.  Separating the branch of Russian Mythology from it’s family of Slavic Mythology may not be common for English speakers.  Russian Fairy Tales are far more common to English speakers and are more accessible in children’s books.  The Bear & Nightingale is great for reminding us of Russian Fairy tales and the magical stories they contain.  I’m certainly eager to dig deeper and older, venturing into the mythology.

All of these writers are giving exposure to ancient stories that are not commonly read by a wide audience.  I’m sure after the very main stream Neil Gaiman packed the gigantic Norse Myths cannon into a compact trade paperback, more folks will be eager to venture out and read that barbarically long and complex Norse Mythology Cannon.  There are a few solid places to start for adventurous folks: The Poetic of Edda, Saga of Volsungs, Saga of Icelanders, The Nibelungenlied, and to include the neglected Finnish folks, I’m compelled to say The Kalevala.  If you’re lucky to track down the encyclopedic long book of all of Scandinavia’s Mythology, it’ll take at least 5 years to read it all!  In this light, Gaiman provided an epic service to those who are new to Scandinavian or Norse Mythology and are terrified for not knowing where to begin.

So, exposure to unsung myths, legends and fairy tales are a great benefit of writing about a subject from an English speaker’s point of view.  As a native English speaker, the novel is sure to have that contemporary feel which just makes the book even more accessible and maybe can earn it a wider readership.

The downside is part of the ‘Own Voices’ discussion.  Do the benefits outweigh the costs in this context?  Does it break down barriers so more folks are willing to pick up a Russian Mythology book written or translated by a Russian Writer?  Or does it keep the English writers at the forefront of the fiction world?  Is there a place for both to exist?

Most of my reading is with dusty classics of all kinds.  So I’m far more used to reading pompous language.  While reading The Bear and Nightingale, after the first 50-100 pages, the story began to feel more contemporary.  I could feel it was written by a North American.  After reading her bio, I couldn’t abandon that feeling and it interrupted the story for me.  I can step back and say I enjoyed the story, but it just didn’t have the depth that I’m used to as a reader of classics.

So I can appreciate the wider appeal of this book.  Part of me deeply wishes that a Russian person would write about this subject.  I do want to read books that are ‘own voices’ because there is an authenticity to that.

But, when does going too far into the own voices discussion become reverse racism?  And what exactly determines an own voice?  If someone has a skin color but has a parent of that voice, whose voice do they have?  Is it the voice of their parent or their own skin color?

Lisa See is a great example of this.  She’s born to Chinese parents and was raised in the USA.  She specializes in writing about China, specifically, Chinese Historical Fiction with female protagonists.  She’s very forthcoming about her heritage.  Her novels do have such a depth to them and she’s written a few.  Her recent one, The Tea Girl of Hummingbird Lane just seeps with all aspects of the dying culture of the Akkha Tribe.  She includes lexical idioms, sayings, customs, superstitions, sacrifices, diet, dress, environment, and the recent social situation.  Her writing is poetic, which forces the reader to slow down and absorb the culture on the page.  The story is a fast paced with a dual story line.  Granted, See is a veteran and Arden is a debut writer. 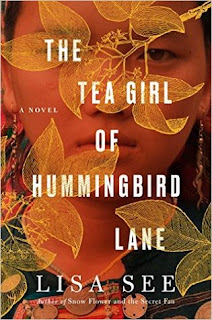 So, what are own voices and do the benefits outweigh the costs?  What is an ‘own voice’ in our globalizing world?  What is contemporary literature’s role in cultural literacy?  Can a writer learn more about the ‘other’ by borrowing their voice?  Would this create a bridge among readers?  Does it increase barriers for ‘own voices’?

The whole point of  the ‘own voices’ movement is the encourage minority folks to chime into the dominant conversation.  Where do the translators fit into all of this?  What are their roles and code of ethics?

The Poetic of Edda, Saga of Volsungs, Saga of Icelanders, The Nibelungenlied and The Kalevala

The Bear & Nightingale hints at these 2 Fairy Tales:

Link for Andrea’s Fabulous Review, where I found these 2 Russian fairy tales.

Samples for: ✓ Constance Garnett ✓  Richard Pevear & Larissa Volokhonsky  “He had become so completely absorbed in himself, and isolated from his fellows that he dreaded meeting meeting, not only his landlady, but any one at all.  He was crushed by poverty, but the anxieties of his position had of late ceased to weigh upon him.  He had given up attending to matters of practical importance; he had lost all desire to do so.  Nothing that any landlady could do had a real terror for him.  But to be stopped on the stairs, to be forced to listen to her trivial, irrelevant gossip, to pestering demands for payment, threats and complaints, and to rack his brains for excuses, to prevaricate, to lie — no rather than that, he would creep down the stars like a cat and slip out unseen.”    (Garnett;  Part 1, Chapter 1, Page 1-2) “He was so immersed in himself and had isolated himself so much from everyone that he was afraid not only of meeting his landlady but of meeting anyone at all.